Tower demolished, no video of the Israeli attack 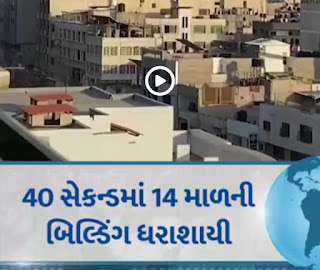 To make the law and order situation in Gujarat more sophisticated, the government has made intensive plans to increase the number of police personnel and also increase the number of police stations. In the last seven years, more than 49,000 police personnel have been recruited in Gujarat. Another 13,000 personnel will be recruited next year. The state government is also providing facilities including training to the police personnel for equipping them with modern technology. Minister of State for Home Affairs Pradipsinh Jadeja said this at a meeting of the advisory committee held at Gandhinagar today.

Gujaratis were brought back from abroadHe said that the traditional image of the police has been differentiated as a result of the work carried out by the police personnel to implement the lockdown even in the worst of times to prevent the transition of the corona during the lockdown. During this period of lockdown, NRG The department has also taken steps to repatriate more than 55,000 Gujaratis living abroad under the Vande Bharat Mission with the help of the Central Government. Similarly, the state government has repatriated millions of inter-state workers to their mothers.

Work on Conviction Improvement Project is also in progress,he added, adding that work on Conviction Improvement Project is also in progress to increase the Conviction Rate in the state. It is planned to provide guidance for 24-hour investigation. Provision has been made to appoint a retired police officer as a persuasive officer. Under this project, separate rooms for investigation, call center, coordination of Rakshasakti University for FIR drafting, training facilities for police personnel and services of FSL will be availed in a more comprehensive manner.