Standard. The biggest news regarding the board exams of 12th is the important statement given by CM Rupani.

Mass promotions were already given in Std-1 to 9 and Std-11 in the state. Now it also included standard-10. The core group meeting held at CM House was also attended by Energy, Saurabh Patel, Home Minister Pradipsinh Jadeja, Chief Secretary Anil Mukim and Secretaries of Health and Education. 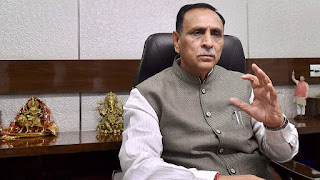 Standard. Chief Minister Rupani has issued a statement today on the issue of 12th board examination. He said that Std. Mass promotion will not be given to 12th standard students, examination will be taken after Corona's condition is brought under control. Giving mass promotions can cause difficulty in college admission. Due to which this decision has been taken after a meeting with the officials of the education department and the education minister. 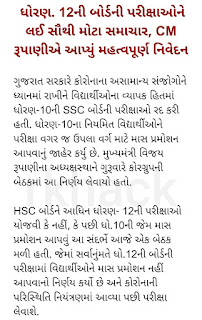 It may be mentioned here that after the earlier decision to give mass promotion to regular students in Std-10, Education Minister Bhupendrasinh Chudsama has not taken any decision other than HSC at the present stage. He added that the decision to conduct the examination for HSC as earlier decided was unchanged. 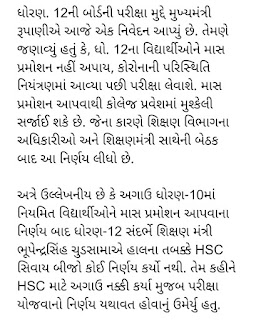 The Gujarat government had canceled the Std-10 SSC board examinations in the wider interest of the students in view of the unusual circumstances of Corona. It has been announced to give mass promotion for upper class to regular students of standard 10 without examination. The decision was taken at a core group meeting chaired by Chief Minister Vijay Rupani on Thursday. 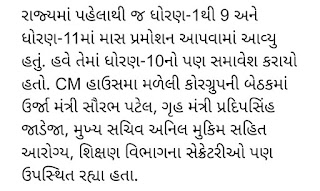