Gujarat has 2 rain systems active at the same time, rain is forecast in so m 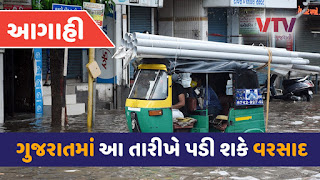 Rain may fall in these areas on June 9

Ambalal Patel has done the same thing in Gujrat from June 28-29 The official monsoon sales are still 20 days away.

After Kerala, monsoon is increasing

After Kerala, the monsoon is now moving forward. The meteorological department has forecast rains in the state in the coming days as the pre-monsoon becomes active.

Even two days ago, several districts in the state received rains, which are now reported to be on the rise. the news has also come that Gandhinagar, Ahmedabad, Mahisagar, Surat, Tapi, Panchmahal are also likely to receive rain possibility well and you also know that we give you proper news fro all.