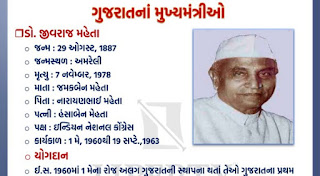 The state of Gujarat was created on 1 May 1960, composed of the gujarati-speaking districts of Bombay State following the Mahagujarat Movement. Jivraj Narayan Mehta of the INC was the inaugural chief minister. Narendra Modi of the BJP is the longest serving chief minister for twelve and a half years from 2001 to 2014. He resigned in 2014 to become the 14th Prime Minister of India. He was succeeded by Anandiben Patel who became the state's first woman chief minister. The incumbent chief minister is Vijay Rupani, who is in the office since 7 August 2016.